Resident Evil games always had some of the most interesting development stories told in video games. Compared to other entries in the franchise though, Resident Evil Zero had a much less chaotic development cycle.

I've already briefed this a bit in the last post, but this game was about to come out late in the Nintendo 64's life cycle and memory wasn't helping. So Capcom moved the game over to GameCube so it could become the gorgeous, bad-ass looking game that it became.

Now, about the footage. If you were a major Resident Evil fan back in the day, you may have seen this particular trailer from E3 2000 before in the past as a really low-res video on YouTube or even back in the day when, even then, it looked like a pixelated mess of squares. Now, thanks to a VHS source I purchased online where this trailer originated from, and for YouTube for finally enabling 60FPS video playback, I can finally now share this 1080p60 HD rip of the trailer that was originally of low-quality for the rest of the world to watch.

I'll get into the meaning behind Capcom E3 2000 Sales Presentation [VHS / 2000] at a later point of time. There's more where this trailer came from too! Stay tuned!
Posted by OKeijiDragon at 11:27 PM No comments:

I was ecstatic to learn of YouTube enabling 60FPS video that so I made this little video.
The video just sums it all up that I'm back. It's been a while since I've done anything on YouTube.


First 60FPS video I'll be uploading today is footage of Resident Evil Zero on the Nintendo 64. Get body ready.
Posted by OKeijiDragon at 3:21 PM No comments:

I'm a fairly big fan of old-school Resident Evil. Anyone remember that spin-off that came out for PlayStation in 2000, where you're actually controlling your character in a first-person viewpoint without any pre-rendered backgrounds? I didn't. I never cared about the spin-offs but some fans do, and its those fans I have a treat for tonight.

Tonight's focus will be Gun Survivor however and once again I do not provide translations.


So let's go over this quick. Pages 32 to 37, starting from the left at the top row to the right and following that same orientation on the middle and bottom, are just strategy guides with supplemental maps and enemies of the game. 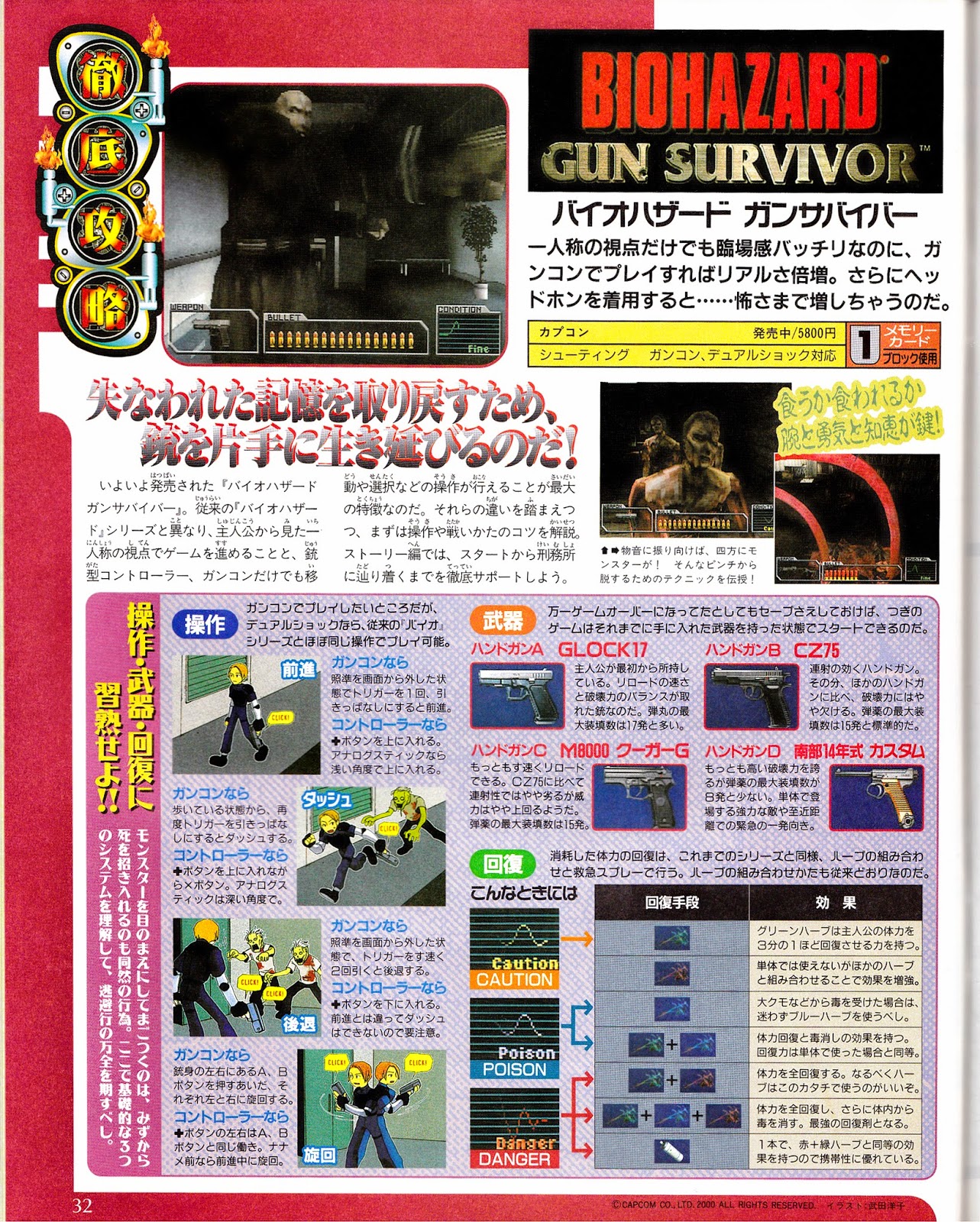 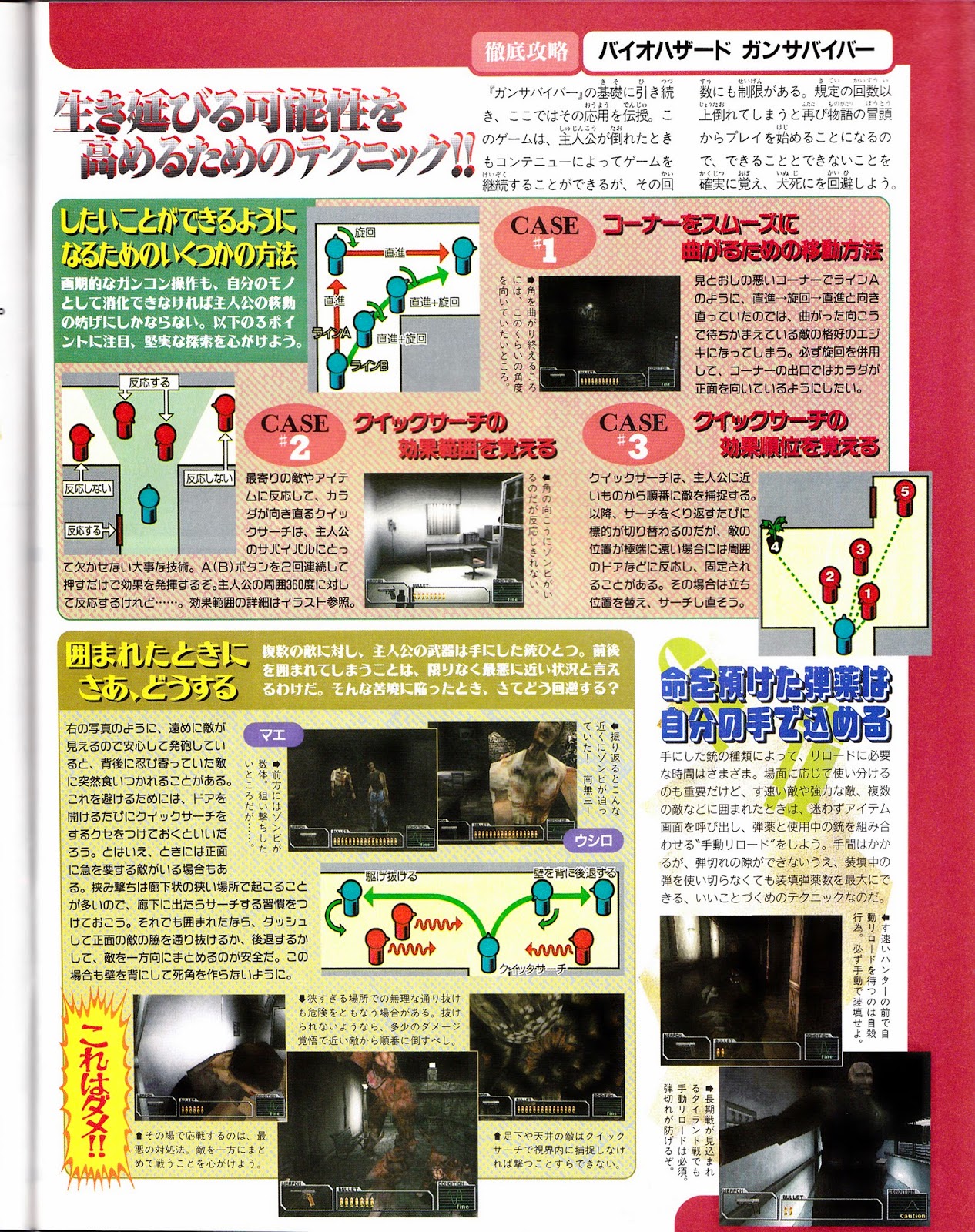 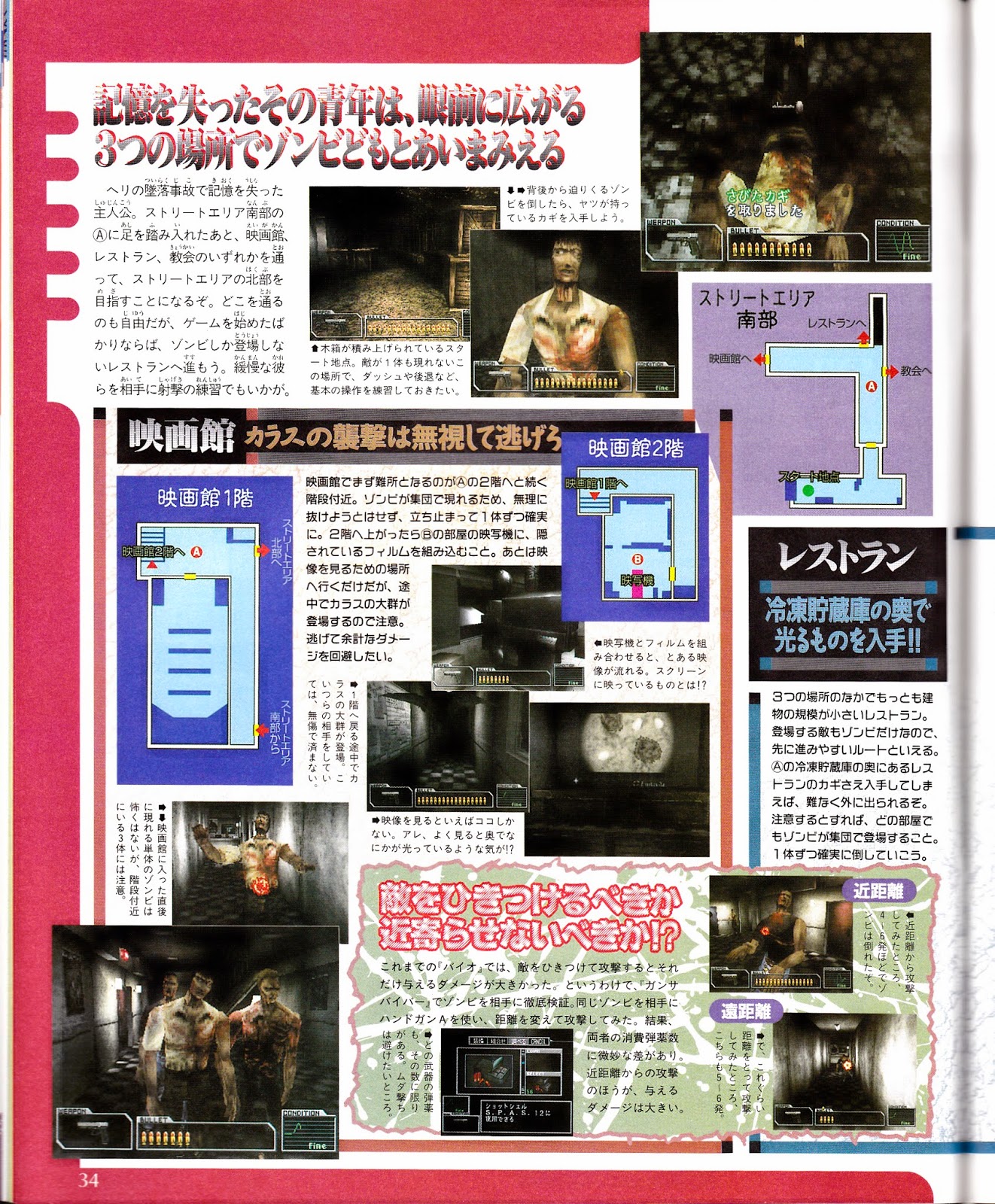 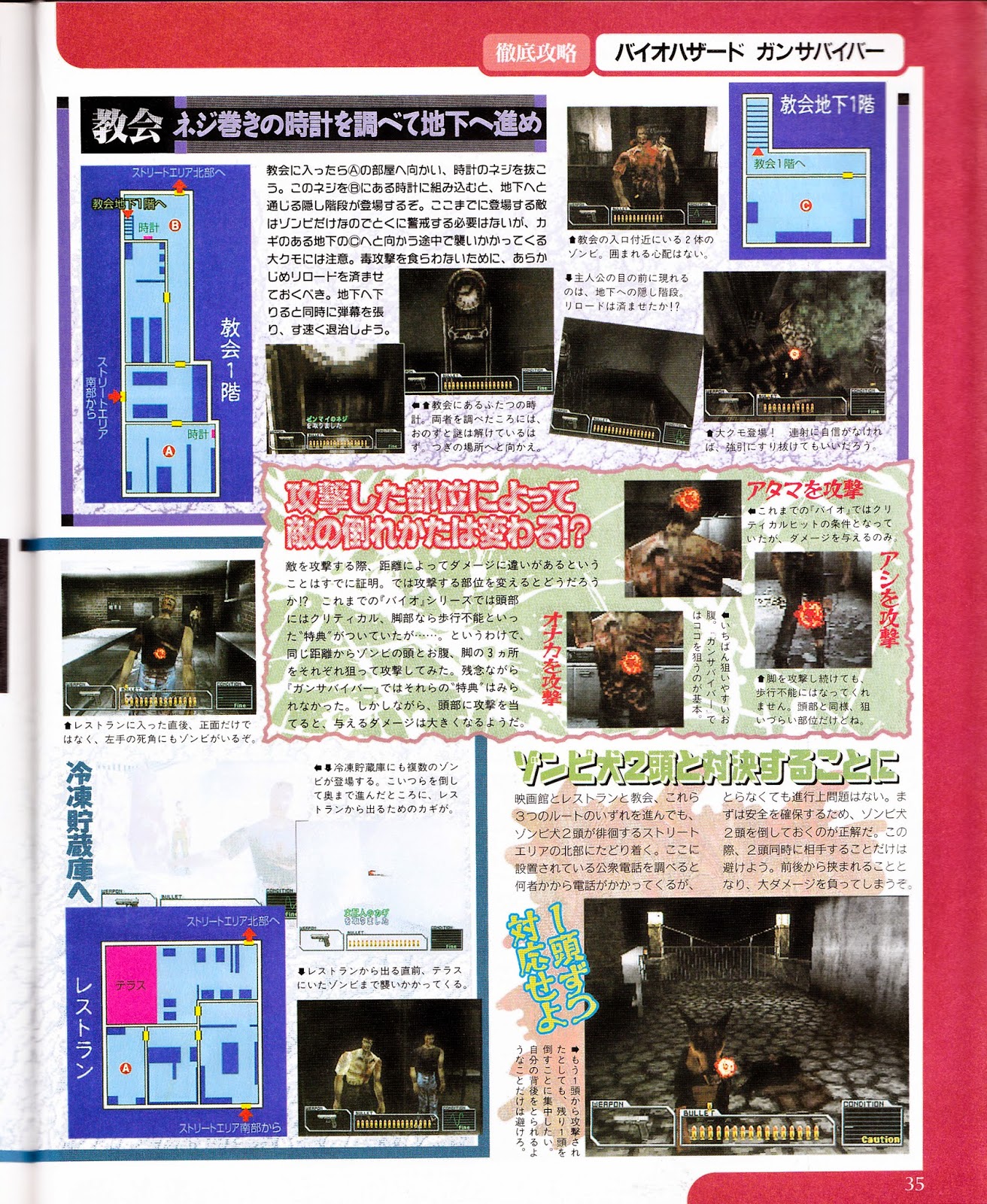 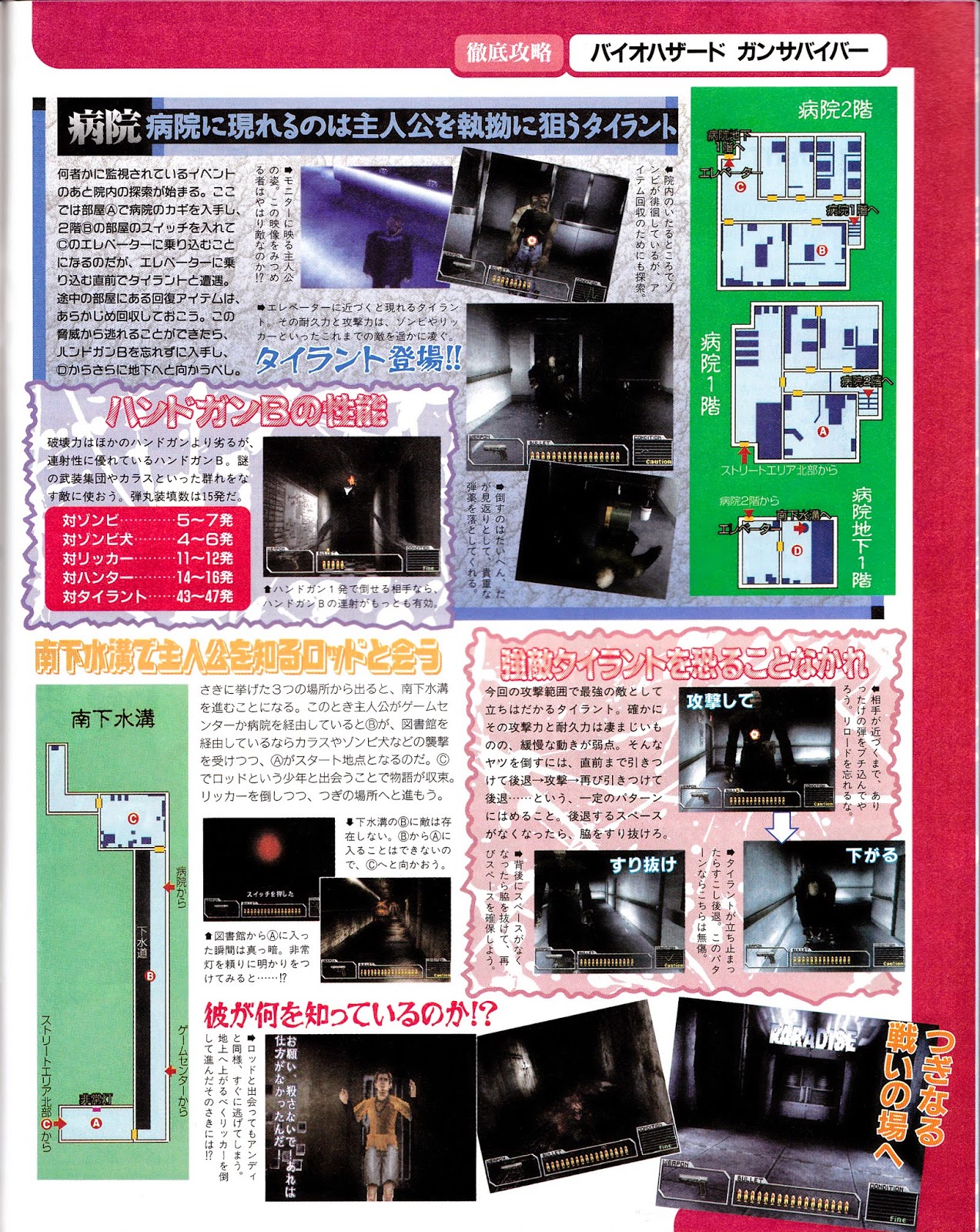 The common format for Famitsu reviews are presented in a four-score column with four reviewers in a row providing their scores, individually. On page 39, Gun Survivor scored a 8, 6, 6, and 5, totaling 25 out of 40.

The average-level scores given by Famitsu PS' reviewers do reflect the same overall attitude toward the game at the time of it's release. It actually got a lot of venom from many publications, particularly from Game Informer who called the game one of the worst horror games ever made. Interestingly, Weekly Famitsu scored the game six points more than its PlayStation-specialized publication. How interesting indeed.

I've never played so I didn't care much for scanning these articles at first. But I figured, I should just archive and scan all Resident Evil content from this magazine for the sake of archiving (I'd be happy to look into other games that I haven't scanned and released on my blog too).

Having just sampled a video of the game in action though, it does have that consistently dark, industrial atmosphere of Resident Evil 2 that I adore so much. Maybe I'll give it a try myself sometime.

Posted by OKeijiDragon at 10:09 PM No comments:

Oops. This article was meant for yesterday, and I was working on it then, but time management is a skill I have a lot to improve upon. But here it is, a scan about Resident Evil Zero as it was meant for on Nintendo 64.
Anyways, page 148 of Famitsu PS (Japanese) NO. 81, 5/12.26/2000 gives a small column of their Capcom page about the Item Box function in the game -- or rather, lack of. The ability for your character to drop items in any room, was evident in this version, and the column specifically refers this to Sweet Home's inventory system. Having never played this game personally, I have no clue as to how much both game's have in common (besides the series' roots to the Famicom game).

For those that need a little context, Zero was a prequel to the hit survival-horror franchise that was meant to be the game that carried the same level of ambition and quality its CD-based predecessors had onto a small-capacity Nintendo 64 cartridge. The N64 port of Resident Evil 2 cemented that probability in late 1999. But that's not to say things would go smooth for this title.

Basically, while the game had a much less chaotic development cycle compared to previous entries, the only major roadblocks for Zero were basically both the memory capacity limitations and the timing of its projected release date. The game was simply becoming too big to fit into a cartridge and the hardware transition from the Nintendo 64 to GameCube was fast approaching. The only logical solution was to adapt to then-upcoming sixth generation, and release the game as a GameCube-exclusive in 2002.

As with many of the Japanese I will be posting on The Game Informant, let's hope someone plucky will be willing to translate this article and enlighten us the details of this column. The front cover and entire page can be found below.

Coming up next, I'll post up more scans other some other Resident Evil games from this era of gaming. Stay tuned!

Posted by OKeijiDragon at 3:51 PM No comments:

So shortly after the Sonic Adventure AutoDemo was released early last summer by Orengefox at Sonic Retro, I bought this magazine on eBay. It's got lots of info on that game, plus coverage of Shenmue's Nov. 1998 unveiling in Japan, and other awesome games, but this article concerning the former is what motivated me to write about this.

The article covers the Saturn version of Sonic 3D Blast that was released much earlier in North America and Europe than it arrived overseas. Interestingly, this game wouldn't be released in Japan until October 1999, alongside the International version of Sonic Adventure. As we can see, the release date is given as "'99 (to be decided)." Since that Saturn port was already released internationally years prior, there isn't anything prototypical seen in the screens of this article.

What is interesting though, is apparently in the last page of the article is a sort of mini-interview with a Japanese developer of 3D Blast, or someone of significance to the game.

I hope by posting this on my blog that someone would be willing to translate this article and enlighten us on the development of this game, from the Japanese perspective.

Coming up tomorrow, I have an overdue proposition that I've yet to fulfill. It's related to scans of a Resident Evil Zero (Nintendo 64) article that I've promised on Tumblr but haven't delivered on. Stay Tuned!

Posted by OKeijiDragon at 4:55 PM No comments:

Um, hi. I’m a graduated student photojournalist in life, but I like video games.

I’ve always been fascinated about previous eras of gaming and how they influenced and shaped the industry today. I consider myself a contributor to the preservation of video game material, which includes archiving historic digital artifacts and observing obscure content of certain video games and just content that few have seen before. This is stuff that only less than one person of the world population would care about -- and some of that same percentage might consist of admirers of the niche. That’s still a lot of people though, so I don't mind.

So, for this blog, I’ll be posting stuff from a lot of different, specific sectors of video games. I have a few other projects planned for the future, but for now this is my target list of topics I plan on posting about in the near future: Of course, my chosen profession will prevent me from posting daily everyday but (nope still unemployed) I hope to be dedicated to my followers. Please look forward to more crazy stuff I have in store for the future.

If you want to follow me on Twitter, I’m right here. I've also got Tumblr and Google+. As I mentioned before, I've also about 400 videos up about video games and other stuff on my YouTube channel, why don't you check it out and subscribe to me too? I'm open to connecting with readers, followers, and subscribers of mine.

Posted by OKeijiDragon at 12:01 PM No comments: