(Originally published on Tumblr in 2013. Now I'm posting this again, refined, on my own blog because I can. =P)
The year is 1993. The Sega Genesis earned itself the majority share of the gaming market against the Super Nintendo. Cartridges were the rule of the land in video games, and the use of compact discs for games were introduced under the premise of vastly improved sound quality, a larger storage capacity meaning bigger, longer adventures, and especially exhilarating cinematic experiences. The Sega Mega CD and TurboGrafx-CD made it to the market first but, the 3DO would embrace this CD technology in its goal to be the most powerful machine on the market.

Here's a little background since I don't feel like writing that much about it tonight. In the summer of 1993 Panasonic showcased its then-state-of-the-art 3DO video game console to the public at the Consumer Electronic Show in Chicago, Illinois. At the mist of the show, Trip Hawkins, founder and president of Electronic Arts, The 3DO Company, and later Digital Chocolate in 2003, present the finalized specifications and printed circuit board to a formally dressed audience full of press members and industry insiders. 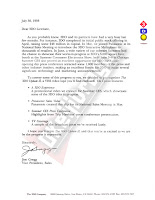 The general public was excited of the console, but probably until they learned of the morbidly-high $699.99 price tag (that's about $1,221 in 2018 dollars, folks) that would bar anyone who didn't want to break the bank from making the investment. Following the event, a marketing VHS was sent out to licensees to cover the well-received press conference and to persuade them of the potential the console had. Along with a complimentary hand-signed letter by company president himself, which can be found below or after the jump, the VHS tape featured four segments (including a complete version at 60FPS that I've recently uploaded!):


The first segment, A 3DO Experience is a promotional video that was displayed on multiple monitors at Summer CES (Consumer Electronics Show) in 1993. Lots of strange, obnoxious FMV games, cheesy, early 90's butt-rock and mediocre CGI, and a monotone emotionless narration by two voice narrators that would bore anyone to sleep. At least, the 3DO port of Dragon's Lair looked nice high-res for its time, right...? Nah, I wouldn't know.

The Panasonic Sales Video is the second segment of this VHS that... is just what it sounds like. A relatively unexciting clip created for a "National Sales Meeting" in May 1993 to business retailers and licensees. Trip Hawkins makes not only an appearance in the middle but a bold declaration that "the 3DO is going to be the biggest product in your store since the VCR," for three R.E.A.L reasons. What are those reasons? I'll make it short for you:

The third segment presents the presentation Trip Hawkins gave in front of an audience of suits from the press and industry insiders at the Summer CES 1993 Press Conference held on June 3-6 in Chicago. Check out that silicon he's holding on 10:37 as he says "it's real." "Six months ago [at that time], we had the promise and now we have the reality," said Hawkins, unaware of the grim result that would follow the 3DO's performance just a year after it's launch.

This fourth and final segment shows us clips of the numerous news coverage from such big-name TV tabloid programs as Showbiz Today, Entertainment Weekly, Good Morning America, and Headline News (who the reporter's comments, the 3DO name sounds like something out of Star Trek), for the console after Summer CES 1993. At the end of the video, the Marketplace reported that Trip Hawkins had been awarded the CEO of the Year award in the Bay Area software category by the professional firm Ernst & Young. Good for him.

So in the end, the 3DO didn't do too well thanks to its ridiculously high price and over-reliance of full motion video in the games, among many other reasons that I don't particularly care to mention at the moment. If you wish to explore this part of gaming history, I recommend Wiki-ing it or better yet check out 1UP's Going-Out-of-Business article. It really opens your eyes as to how this console came about in the more detailed explanation of how it it came about. Finally for this article, I'd like to leave with a few photo shots of the letter and tape. 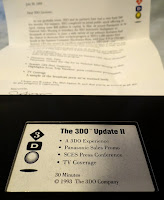 Posted by OKeijiDragon at 10:32 PM No comments:

Posted by OKeijiDragon at 9:45 PM No comments: