So I hear Konami has been quite an asshole lately. The way they mistreatment their workforce, withdrawing from console game production, and the complete, sensational mess that has been the Hideo Kojima divorce. Yuck, a cesspool to be sure. 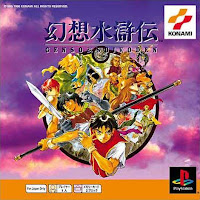 Let's escape from that to about two decades ago when they were at the twilight years of their dignity. Here's a game that I've hear good things over the years on and off, but have never played. This is Gensou Suikoden.

As an RPG game centered around political struggles in a fictional, fantasy empire, Suikoden was made out of a labor of love from the get-go, starting out as a launch title for an unannounced Konami home console. Very little immediate information about that exists on the internet, but the game, under the imaginatively clever name of "RPG," was in development for a brief time but was moved over to the PlayStation, otherwise codenamed the PSX. A relatively more creative acronym than "RPG," I think. In addition, the script for its sequel was originally used for this game but its creator felt he needed more experience to give it the proper treatment it deserved and instead created a "prequel script" for this game instead.

In July of 1994 𑁋 about a year and a half before the game's domestic release 𑁋 Suikoden was formally unveiled to players at the V-Jump Festival '94 exhibition in Japan. That's not the only feature in the following clip that was preliminary, though.


We also see a preliminary version of the standard PlayStation controller featuring odd symbols on the shoulder buttons that would later become the numbered R and L buttons.

It's rather interesting to see this game unveiled to the gaming public about a year and a half before either the game and console came out. It's thanks to this fact however that we can actually see the early designs for the PlayStation controller. As it is known, the original PlayStation controller went through several dozen iterations before the company settled on its finalized design. The most striking detail seen in are the shoulder button designs on the top of the controller. There are no L or R labeled buttons but instead are some triangle-shaped symbols that I can't make out what they're supposed to be.

Obviously, the controller wasn't finalized at this point in time but it makes clear that Sony Computer Entertainment had provided a 3D console that enabled third-party developers like Konami the confidence they needed to jump onto polygons so soon. Sony lured them into their boat quite well.
Posted by OKeijiDragon at 3:55 PM No comments: