Yikes, it's that game.

Sonic Boom was a catastrophic failure of a game that no one wanted, expected or cared about. As we all know, the damage made to the brand after having it being partially restored to greatness by Sonic Generations (and brought down again by Sonic Lost World) has arguably been done worse than 2006's abysmal Sonic The Hedgehog. A feat that many didn't think was even actually possible, yet it did. Lone wolf game investigator Tamaki has a terrific video of the whole situation over at his YouTube channel.


The Japanese weren't spared of this game either and from the looks of it, they received it better than the rest of the western hemisphere did, at least under Famitsu's reviewers (this was the same magazine that gave the original Dreamcast version of Sonic Adventure a soaring score of 38/40, Sonic '06 a 30/40, and Generations a 35/40), so take their credibility with a grain of salt.

So I bought this magazine at a Japanese bookstore in San Francisco's Japantown about a year and a half ago. At first, it was about seeing what cool stuff I'd find about Super Smash Bros. for Wii U / 3DS but then I stumbled upon an article about Boom. Page 232 of Weekly Famitsu Issue #1345 is the article about Sonic Boom. If the language itself won't do anyone any favors, then surely the images - and the characters, Metal Sonic and Shadow (at least his katakana-written name) - may.

It's really too bad at this game ended up the way that it did. I knew that this was a spinoff but I thought it was going to have something rather interesting environmental art style going for it. This game was being made by a developer who formally worked on the Crash Bandicoot series under Naughty Dog so with such credentials it's actually disappointing this project resulted in the mess that was but for all I know, it may have just been a case of publisher-interference on Sega's part. That's never a good thing.

Oh well!
Posted by OKeijiDragon at 9:04 PM No comments:

Software porting has always been a thing in digital entertainment. Seeing a game originally released in one, single system would oftentimes be on another in a year's time. That was especially true in the 32-bit era and before it. These days, nobody wants to deal with old stuff from a year before and publishers, who hold the keys to the game's IP, are particularly privy to that and so you see console ports of the same game across different platforms on the same day.

The video game Mega Man Legends was absolutely no exception to the former, but I'm guessing it was more Capcom wanting to recuperate some of the costs of the original game, since the it wasn't the huge commercial success that they wanted. The effort put forth onto this port wasn't stellar either. Last month, me and a couple friends of mine released an early prototype of Mega Man 64 online to some fanfare for Legends enthusiasts like myself.

What you see above is actually an abridged version of the three and a half hour surprise livestream that I did before we released the ROM online. Not having satisfied with how it turned out, I went trimmed it to about 25 minutes making it more entertaining and watchable. Also included are some gags you might want to check out. There are also annotations that deliver context behind certain prototypical happenings in the video.

Okay so, about Mega Man 64. It was sloppily ported. It's a messy, compressed recreation of the original experience. Certain visual effects are nerfed, framerate suffers in places that should never/didn't happen on PS1, vaselined textures that undermine the sharp, visual charm of the game, and my personal favorite (see 4:50). Having grown up with the original PlayStation version, I see how this port undermines all that was great about MML1. You could also see why I wasn't initially thrilled about this prototype. 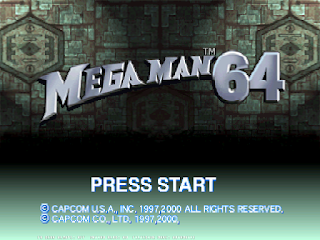 A few months ago, me and friend Pixelbuttz and Protodude were tipped off of a prototype build of Mega Man 64 that was in the hands of a collector. The gentleman acquired it from a friend of his and decided to share the knowledge of his existence to AssemblerGames, a video game enthusiast forum.

In addition to the reasons I've explained earlier, I wasn't that particularly interested in this build because this would have represented the development of Mega Man Legends as it was being ported to the N64. Having realized that exact sentence I've just said, I figured this might be interesting after all. It wasn't until this collector had posted a video of the prototype in action on YouTube that it finally piqued my interest.

The prototype included the title screen with a menu to access a scenario flag switch, a stage select of sorts and the ability to enable or disable certain scenarios in the game. Following this revelation, Pixelbutts scrambled to try and gather as much funds as we can to beat out any competition that would be interested in acquiring the prototype.

When I say scramble, I really mean to say that PB had just frantically made a GoFundMe page not realizing what hurdles it would take to overcome the complications that came about and what a royal pain-in-the-ass lesson it would be to learn not to repeat again (never resort to GoFundMe, stick with PayPal only). PB contacted 100,000 Strong to spread the word of this effort to bring more people to contribute. We really just wanted the ROM of this thing, because we knew logistics would complicate things with the physical goods (and boy, we'll get into that in a minute).

Within a day or so, we were able to acquire $400+ until the dude offered us to pay him that amount and he would compensate for the rest of the cost. Cool guy.

We thought we were over that mountain until the package arrived from the previous owner going through customs. Some asshole basically told the bloke that he not only had to pay a certain expensive fee to get it delivered to his residence, but that they were essentially taking the package hostage until that amount was paid for. Poor dude. He actually had to drive to there and explain what the hell it was. Yikes. Thankfully, it was all resolved and soon after that he dumped the ROM. Now it's all preserved for eternity with a download link from your truly:

I'd like to thank everyone who contributed to the recovery of this prototype. We now have another piece of Mega Man Legends history preserved and we can also see what a complete mess the port was in its transition from PlayStation to N64. If you'd like to see what is being found so far, go hit up the prototype's page at The Cutting Room Floor.
Posted by OKeijiDragon at 2:57 PM No comments: Links to this post