In a time when Street Fighter and Mega Man where the biggest names in Capcom's arsenal of video games in the early 1990s, 3D polygonal games had just begun to be a thing and polygons consisted mostly of origami figures that resembled moving pyramids and stationary chunks of sausage blocks, figuratively speaking. BIO HAZARD, or as commoners call it Resident Evil, would become the company's first bold experiment working with 3D polygons that would pay off in a major way.

Let's set the clock back to late summer of 1995. The PlayStation was already less than a year old in Japan, while BIO HAZARD had been in development for some time already. At this point in time, the game had just moved on from its "co-op" experimentation period (which not much is known about, and if I can even say it was co-op, actually) and into the period where survival was mandatory and isolation horror would shape up the final form it would assume.

On stage, director Shinji Mikami and supervisor Masahiko Kurokawa would present this direction to the silent audience of hundreds at the V-Jump Festival '95 in Japan.


This footage has been around for a long time now and in fact some of you might even recall seeing it on Inflames' website or other familiar locale. For the purpose of preservation (and because I can't stand the quality of the original rip anyways), I've once again taken upon myself to purchase the original VHS source to bring to you remastered footage of the segment in 1080p60.

So the narrative is set in the near-future (for the time of the game's release) of 1998 at the northwest side of the United States where S.T.A.R.S, a police force stationed at Raccoon City, is called in to investigate a series of bizarre murders committed in the outskirts of their city. Upon receiving no word from Bravo team, the team that was initially dispatched the previous evening to find any clues to intercept the supposed killers at the Arklay Mountains, Alpha team arrives swiftly to locate their missing members.


To their horror, they discover the grisly remains of their compatriots. The vicious dogs responsible for the deaths appear abnormal, and set their eyes and noses on the remaining Alpha members, killing one of them by the neck, and chasing the rest to a nearby abandoned mansion full of zombies and other horrific monstrosities. Now taking desperate refuge inside the establishment are three (six?) remaining S.T.A.R.S members: Chris Redfield, Jill Valentine, and Albert Wesker. They don't know where Barry Burton is or that Rebecca Chambers, who had one hell of an horror fest with an escaped convict the previous night, is somewhere inside. Thanks for leaving them behind, go to hell Brad Vickers.

Upon the unveiling, comparisons were already being made between Resident Evil and the preceding Alone In The Dark, released four years prior. The two share similar horror and gameplay philosophies, but the key difference being that Resident Evil's graphics kicked ass* according to Mikami. He wouldn't be wrong though, it did prove itself as an immersive horror game with an intricate level of graphical detail into the polygon character models and CGI backgrounds even during the advent of the pre-rendered computer graphics craze in video games at the time.

So onto the prototypical context of the footage itself. First off, only a handful of areas of the first floor mansion are actually playable and the camera positions in some of these areas are drastically different. For example, in one angle, the camera appropriated to the first floor door leading to the first zombie is positioned behind the banister from the second floor (which I find the angle itself interesting, actually).

Jill Valentine is stands at the front stairs on the first floor of the mansion. She doesn't say much other than "I'll stand watch here." Nothing else. Interestingly, despite her presence in this prototype, Jill isn't actually seen in the embedded footage above. My guess is that in between the aforementioned previous prototype version and the leaked August 4th prototype, her model had just been redone from her previous, implemented design. But that would mean that there had to have been a build of that that existed at some point.

One of the elements I find more interesting is the lack of a finalized set of voice samples for Chris, possibly in Japanese. Presumably, this build was created at a time when the game was still planned to feature Japanese language performances. There's even a set for Jill as well. Take a sample (for more, check out the prototype's page that I sometimes update at The Cutting Room Floor):

Aside of that, and a snake that shows up from almost out of nowhere at the exit to the garden, there's not much else in the build that provides more of the game than the later protos exhibit. Beyond this prototype, there are at least two more other prototypes (three if you include the Trial Edition) that proceed the progress of the game's development. For now however, the focus is just for this build only. Sometime in the future, I'd like to explore those other builds. If there is a prototype of this game that you'd like for me to explore and document in detail, I'd be happy to.

I'm more motivated to start and complete projects based on the level of demand for their release, and in fact I've invited YouTube users to like this comment I've made about remaking a video about the Japanese dialogue that never materialized in the final game. You can too. Otherwise, hit me up at Google+ or Twitter if you want me to talk about it more.
Posted by OKeijiDragon at 11:01 PM No comments: Links to this post

Watching prototype footage of games are like dreams (NiGHTS Into Dreams...)

Or I don't know, I'm just trying to be clever.

Anyways, one of the best ways of preserving and observing video game prototypical media is collecting footage of them in action on game catalog tapes.

Sega Video Magazine is a good place to start. They're a series of game catalog VHS tapes distributed in Japan by Sega Enterprises that promoted and centered exclusively around Sega's own games and games from other publishers during the Mega Drive and Sega Saturn eras. A lot of these tapes have footage of games that haven't taken their final forms yet, which oftentimes can exhibit strong, interesting differences in the content from the final releases. The spectrum of this can range from minor to extreme.

NiGHTS into Dreams... doesn't really fall on either side, but lies more in the left-side of the middle. The clip below covers the world unveiling of the game that took place inside the Tokyo Prince Hotel on March 27, 1996 in Japan. Following that segment is an on-screen interview with some of the then-most respected developers at Sonic Team within Sega, who were also responsible for Sonic's greatest games ever. Producer and main programmer Yuji Naka, director Naoto Oshima, and co-game designer Takashi Iizuka take screen time to tell us their stories as to how the beginning of development came about. Unsubbed.


Scattered throughout the interview is footage of the game in it's early stages of development, including the first level Spring Valley that has a different level and object layout. Many of the sound effects differentiate from the final and even the music sounds unrefined, particularly The Dragon Made a Loud Scream. Turn on the video annotations and it'll elaborate the specifics to you.

I've said this many times already but Nico Nico Douga is quite the treasure trove of Japanese gaming history, featuring various promotional videos of various games spanning several decades starting from the 80s. I remember that Super Mario Bros. 3 video that was a big hit with proto enthusiasts in 2011 after it was found on NND. Hopefully, someone will be kind and interested to provide a translation of the interview above.


Posted by OKeijiDragon at 10:54 AM No comments:

(Originally published at the now-defunct DASH Republic and Tumblr in 2013. Now I'm posting this again, refined, on my own blog because goddamn it I can, that's what.) 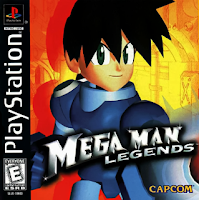 At a time when the third dimension was taking over the gaming landscape in the mid-1990s with 3D polygonal-based consoles, 2D-native characters of previous generations were making the leap to 3D, often to mixed results. Franchises like Super Mario, Zelda, Final Fantasy made the jump to 3D and closely followed their 2D gameplay concepts. Mega Man's transition wasn't familiar.


In what could be called one of the boldest transitions to 3D gaming ever, Capcom completely re-imagined the very core of Mega Man for his first major entry in the world of triangular-shaped polygons and textures. No longer did you select your level on a menu. No longer did you jump and shoot across side-scrolling stages and fight eight robot masters and anthropomorphic robot animals, or fighting evil scientists and rogue reploids. It wasn't gonna be the same Mega Man we knew. Not anymore. 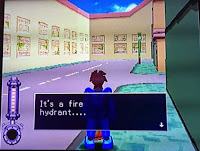 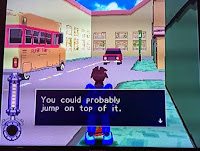 Ah, hell nah. This was Mega Man Legends. You explored inside abandoned ancient dungeons. You shot at creepy bloodthirsty robots that live in said dungeons. You talked to goddamn talking monkeys and legomen. You live in an airship that crash lands on an island that becomes invaded by pirates who gave you psuedo-Team Rocket vibes. You fought a vaguely effeminate, psychopathic cyborg that wants to invoke a skynet-like apocalypse on humans that aren't even humans but "Carbons." You can kick cans over to a bakery and get free money. You could kick animals if you wanted to. In 3D.

So you have these awesome concepts that don't fit into the traditional Mega Man formula and yet it identifies itself as such. How do you market this game to your core fanbase, and the mainstream at large? Well, you create a demo and you include it in the same demo disc of a highly-anticipated sequel to your biggest-selling PlayStation game, with the director's cut release of that game in Japan. Enter Rockman Neo.


Capcom included this demo in the second disc of first edition copies of the Japanese version of Resident Evil: Director's Cut in 1997. The video above demonstrates the several major differences in gameplay, audio and visual content in this pre-release that the annotations in the video will elaborate over.

Mega Man Legends went through many name changes in its development. First, Rockman Neo in Japan, whereas the English name would officially be known as Mega Man Neo when it was showcased at E3 1997 in Atlanta, Georgia; followed by the final Japanese name Rockman DASH. Mega Man Nova (really?) was a likely candidate before someone at Capcom USA or Japan recalled a boring lecture from their astronomy classes in school and figured how lame the name sounded, and finally settled upon... you should know by now.

Yes I know its 35 minutes long (!) but it's full of information, tons of beta facts, and fun stuff that supplements background to this demo. Plus, there's references to TauVertex's Mega Man Legends Abridged series. So take a seat and enjoy all the juicy details this demo has!

If you're even more interested in Rockman Neo, you should check out the Rockman Neo page give at The Cutting Room Floor! Lots of fascinating material found inside the games you thought gave you everything it offered!

Posted by OKeijiDragon at 10:50 PM No comments: